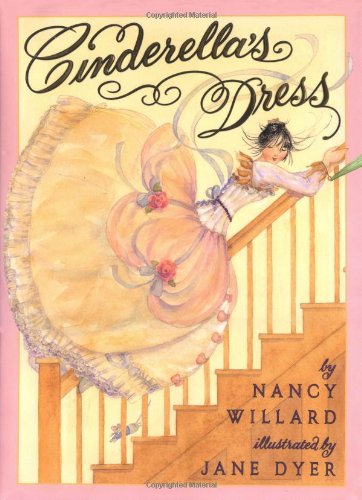 Lilting poetry and a couple of warm-hearted magpies add a new dimension to the familiar tale. In a tree outside Cinderella's window, two birds confer about the lonely girl inside, their plan captured in Willard's ( ) deft verse: "She lights the stove and draws the water./ Her father's weak, her mother's dead./ Nobody tucks her into bed./ This stepsister they love to hate,/ let's make her our adopted daughter." Dyer's ( ) watercolors revel in a fairy-tale mix of eras and objects; Cinderella's cruel stepmother wears a two-horned medieval headdress, but there's a bicycle parked outside the door. When the famous invitation arrives, the magpies craft Cinderella a magnificent dress from tissue, leaves, petals and loot from their nest; the magpie mamma withholds only a golden ring she wears on her tail. But the stepsisters ruin the dress, and Cinderella cries, "If only I hadn't lost the ring/ Mother gave me before she died./ She said 'Hammered from fairy gold,/ this simple band can change your fate.' " Mamma magpie, dismayed, realizes that her ring is really Cinderella's, and her decision to return it ushers in the reversal of the girl's fortunes. Omitting the scenes at the ball, the story's focus shifts away from courtship and romance, and instead considers the tenets of friendship. Dyer's art and Willard's poetry seem entwined; it's a graceful match, likely to cast its spell on fairy-tale fans. Ages 4-up.