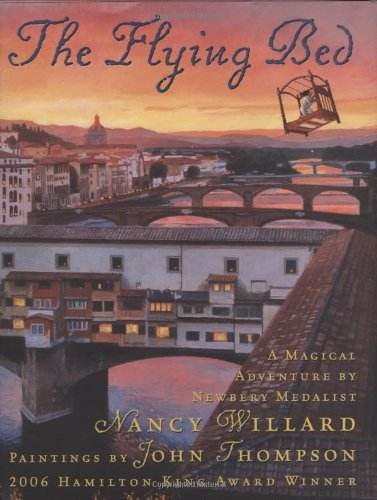 Willard's ( ) enchanting fairy tale takes place in Thompson's ( ) gloriously rendered Florence. Guido lacks the skill to be a great baker like his father: "Guido's icings were lumpy and his fresh bread tasted stale." The man and his wife, Maria, were so poor, "he rarely allowed himself the luxury of a newspaper." In desperation, Guido sells their furniture—even the couple's bed. Maria announces she will move back to her father's home unless her husband buys a new one. Guido finds a beautiful hand-carved bed with a dark past. Thompson's depiction of the bed's intricate carvings make it look nearly alive. The shop owner tells the baker, "This bed chooses its owner, and it has chosen you." That night, just as the couple is about to fall asleep, the bed "bucked once, twice, and sprang out the window into the sky." Breathtaking aerial views of Florence act as backdrop as the bed flies up to the "kitchens in the sky." There the "master baker" hands Guido a small bag of yeast: "Use it when you bake your bread. Never again will you and your wife go hungry." Yet he also cautions Guido, "Never tell a soul about this gift, or it will be as worthless as a cracked cup," setting the scene for another twist of fate. Willard's timeless fable will appeal to all ages, enhanced by Thompson's scenes of a magical city. Ages 4-8.