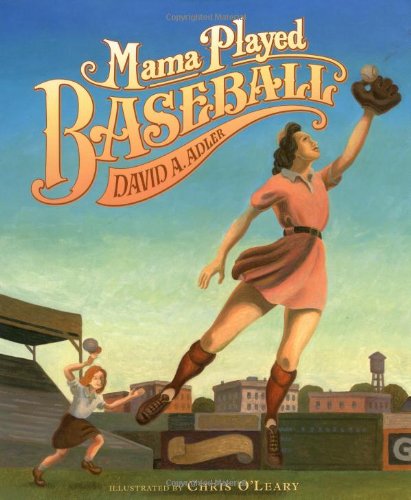 Adler (; ) heads back to the ballpark for this tale of a girl whose mother makes it into a women's pro baseball league during WWII. "While Dad's away, I need to work," Mama tells Amy, who wonders, "" In fact, Mama needs Amy's help to practice for the tryouts (they play catch). Adler includes such period details as mentions of war news and on the radio, but unlike the subjects of his picture book biographies, the characters here never take on much dimension. An evening with Amy and her grandparents gathered around the Sunday dinner table seems designed only to demonstrate her grandfather's memory loss ("You told Amy last night about the war and your medal," his wife says. "Well, I did fight and I did win a medal," Grandpa replies). Scenes of Mama trying out and bringing home her uniform (a fetching pink number) liven up the proceedings, and readers unfamiliar with the start of the All-American Girls' Professional Baseball League (explained in an endnote) may well find this story satisfying, especially when Amy's soldier father comes home at the end. The high point here is the work of debut artist O'Leary, whose sinewy artistic style recalls Depression-era murals. The physicality of his oil paintings, rendered in subtle earth tones, energize the action on the baseball diamond and are equally effective in conveying warmly lit interior scenes. Ages 5-8.