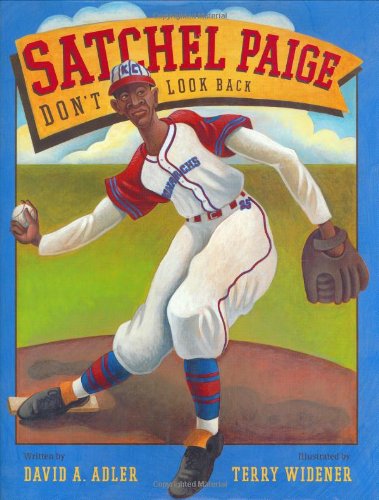 These creative collaborators ( ) offer a multidimensional portrait of another athlete worthy of the spotlight. Born in Alabama in 1906, Satchel Paige was called by many the greatest pitcher of his day (quoted here saying as much are his contemporaries Joe DiMaggio, Ted Williams and Dizzy Dean), yet for years he was barred from playing in the Major Leagues because he was African-American. Adler's crisp yet conversational narrative throws out nuggets about Paige's boyhood (e.g., he earned his nickname after rigging up a pole and rope to carry multiple satchels at the train depot). Aided by Widener's stylized acrylics, which serve up alluring perspectives of on-field action, the author chronicles Paige's accomplishments pitching for semi-pro black baseball teams and in the Negro Leagues. Finally—on his 42nd birthday (he never confessed his birth date until he retired, at age 59), and after pitching for 25 years—he signed with the Cleveland Indians. Readers will cheer Paige's long overdue, triumphant moment when later that year he was the first African-American to pitch in a World Series. Pithy quotes by Paige, interspersed throughout the text, also convey his gumption and grit. Ages 5-8.