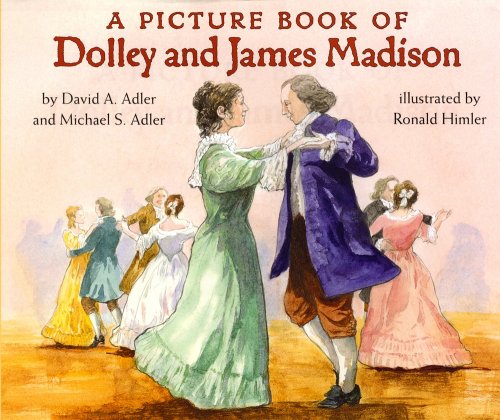 A Picture Book of Dolley and James Madison

An escape from a burning White House opens this picture-book biography on a thrilling note. Unfortunately, the attention-grabbing anecdote soon yields to a more predictable parade of dates and facts about America's fourth president and his equally famous wife: “Dolley was born May 20, 1768, on a farm in New Garden, North Carolina. She was the third of nine children.... Future president James Monroe later described her as a tomboy.” Following the pair from their birth dates and courtship to their achievements as a political power couple, the narrative is concise and accurate, but falls short of bringing these historical figures to life. Himler (teamed with the father/son Adlers for ) helps animate the story with his softly sketched illustrations, but their strength lies in evoking the dress, furnishings and architecture of the period. Ages 4–8.