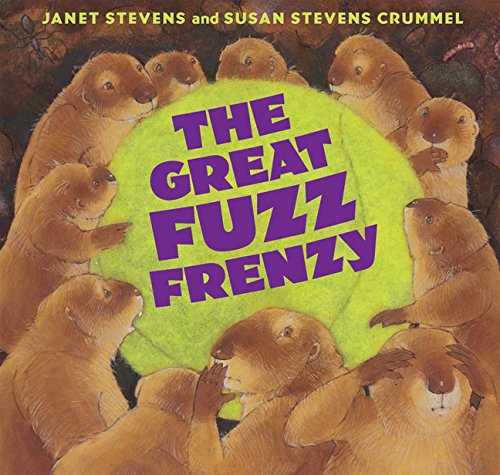 The Stevens sisters ( ) prove that there's a lot of mileage to be gained from a wacky premise and some roly-poly prairie dogs. When Violet the pooch accidentally drops a tennis ball into a prairie-dog town, the rodents discover the malleable properties of the ball's light green fuzz and go wild: "They fuzzed their ears, their heads, their noses." In her full-bleed spreads (sometimes extending into a gatefold to play up the depth of the tunnels), Stevens likens the furry crowd to kids playing dress-up. The prairie dogs fashion Mohawks, tutus, superhero outfits and big fuzzy slippers from the stuff. Only one prairie dog seems immune: Big Bark, a blowhard with a bottle-cap hat. But Big Bark's disdain is just a front; when the other prairie dogs collapse from exhaustion ("Fuzzled out"), he steals all the fuzz—and turns himself into a blob of green that catches the eye of a prey-seeking eagle (in a bravura spread, its mass of black feathers morphs into a maelstrom of menace). Not surprisingly, the prairie dogs put aside their fuzz-based differences, and Big Bark finds a useful purpose for his belligerence. Stevens's watercolors make heroes of these curious critters. She plunges readers into an animated, earthy underworld, endows her furry cast with winning goofiness and turns the winged symbol of America into a figure of fear. Ages 3-7.