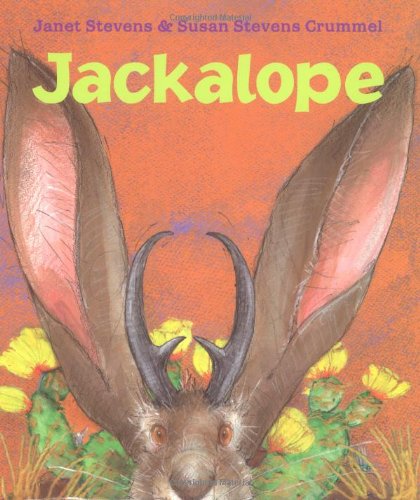 This team's () new fable features a multi-layered story line, kinetic art and a lot of sass. A shambling armadillo in oversize cowboy gear hosts the tale ("Ever seen a jackalope?") and offers down-home moralizing in the margins ("Why, don't you be wishing for something you're not—/ It's better to be who you are!"), while the figure of Jack provides a foolish counterpoint to the armadillo's knowing voice. Jack wants to be scary, and he doesn't care whose toes he steps on in order to be feared. His Fairy Godrabbit brings him horns to make him fearsome, but the two of them must escape hungry Coyote before they can live happily ever after. After what looks like a clever escape, the slow-talking armadillo discloses, Coyote devours Jack and Jill and all the rest of the characters—and there the villain sits on the opposite page, relaxing post-meal in a lawn chair, picking his teeth with one of Jack's antlers. "The end," the armadillo says. It's a startling moment, until—"Ha! Just kidding," says the armadillo on the next page. Stevens's colored-pencil spreads and spot illustrations build momentum and hold many surprises. The double ending, the puns and the artwork will be enjoyed by all ages. Ages 5-8.