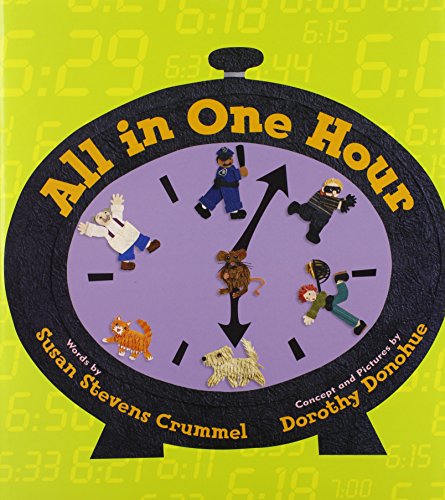 ALL IN ONE HOUR

A lot can happen in 60 minutes, as this slapstick, occasionally hoary tale reveals. Crummel () rhymes her way through a spin on The House That Jack Built. The madness begins early: "6:00 a.m. This is the mouse that started it all." The mouse, an affront to the cat who snuggles with a sleeping boy, runs for its life: "6:02 This is the cat. What happens now? She sees the mouse. Meow, meow!" And so it goes, with the pair chasing through the streets, pursued by a dog, a dogcatcher, a bank robber (whose loot falls smack into the dogcatcher's net) and a policeman. Can banana peels be far away? After an explosive climax at a produce stand, the status quo is restored by 7 a.m.—but not, perhaps, for long. Thick layers of brilliantly hued cut paper supply the originality lacking in the text. Donohue's () jubilant 3-D images, spanning each oversize spread, are so big, detailed and textured that they command interest. The orange tabby, for example, seems nearly to vibrate with its hundreds of tiny, tone-on-tone orange and yellow slivers of "fur," and the shaggy dog carries itself with an almost tangible weight. Set in multicolored type, the text chases its way around the perimeter of the illustrations, echoing the theme of pursuit. Ages 4-7.