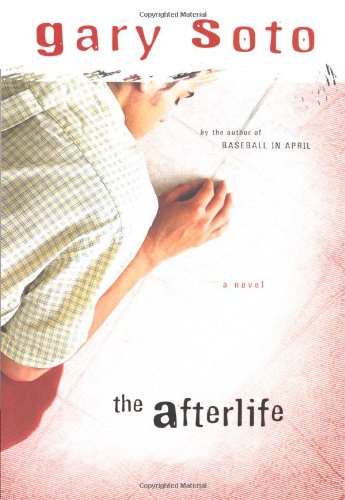 Returning to the Mexican-American community which he has made a career of chronicling, Soto () pens a sort of for the young adult set: 17-year-old narrator Chuy is murdered on page two, for no good reason, in the restroom of a nightclub. Chuy's ghost roams his native Fresno, visiting Angel (", the guy I hung with") his would-be (girlfriend), his family, his school friends. In several compelling sequences, he comes face-to-face with his killer, and is shocked to see that the boy is completely without remorse. There is mention of revenge (Chuy's mother gives his cousin a gun), but Soto keeps that subplot brief, favoring instead a more thoughtful painting of what Chuy's departure means to those around him. Chuy also meets the ghost of a girl who has just committed suicide, and the two spirits begin to fall in love. In addition to this romance, Soto concocts an ingenious way of introducing tension to the story: Chuy's astral body is disappearing bit by bit, and as the tale ends, so too does the audience's knowledge of Chuy's ultimate destiny. While the premise could sound dark and morose, the novel is instead filled with hope and elegance. The author counterbalances difficult ideas with moments of genuine tenderness as well as a provocative lesson about the importance of savoring every moment—a lesson that Chuy, once fretful and insecure, comes to understand. Ages 12-up.