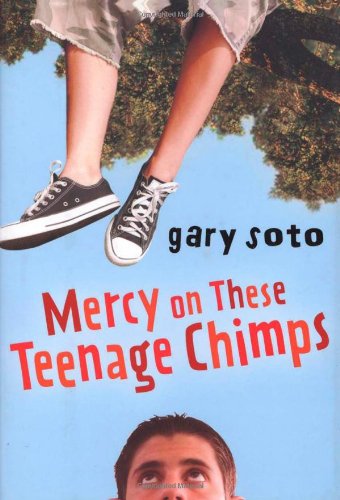 Mercy on These Teenage Chimps

Soto ( ) offers a send-up of adolescence in this intermittently amusing yet rather repetitious saga narrated by a boy who, on his 13th birthday, "woke up as a chimpanzee." Ronnie suddenly notices that his ears are splayed, his nose appears "flatter than ever," and his chin sports "peachy fuzz." Not only that, but he notices, "my gait seemed wider and was sort of rolling and [my arms] were hanging so low at my side that I could tie my shoes without bending over." His best friend, Joey, exhibits the same "teenage chimp" symptoms and takes to beating his chest and jumping up and down. The monkey metaphors come fast and furiously: at a sports awards ceremony, Joey climbs up into the rafters of the gym to rescue a balloon belonging to Jessica, a cute girl who has caught his eye (a coach bellows, "What do you think you are? A monkey?"). Mortified, Joey takes up residence in a tree in his yard. Ronnie then attempts to convince the coach to apologize to his tree-bound pal and also to play Cupid between Joey and Jessica (and between the coach and his estranged wife). He encounters some obstacles, but eventually succeeds. Despite a surfeit of overblown primate-related quips, Soto shapes sympathetic young characters and pulls off some comical hyperbole while imparting a worthy message about self-acceptance. Ages 12-up. (