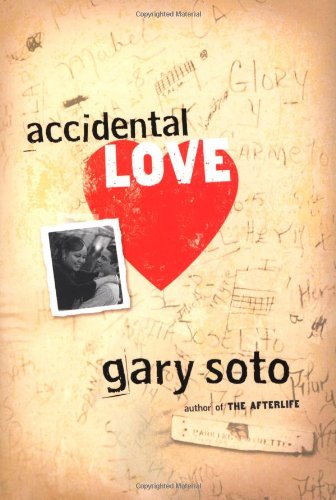 When tough talking 14-year-old Marissa least expects it, she feels an attraction to the most unlikely of boys. An unplanned meeting between Marissa and Rene, a player whose only game is chess, causes sparks to fly. Marissa may start out believing that "Dang, the boy's a nerd," but she finds herself attracted to his manners and to this boy "whose bicycle was too big for him and whose eyeglasses were crooked on his cute small face." In somewhat of an abrupt move, she transfers to a magnet school to be closer to him ("far up north where the Sierras peeked through the valley smog"). Marissa and her "muy wimpy" novio learn a thing or two about each other and themselves when he coaxes her to audition with him for a part in . Their relationship develops slowly and credibly, and Marissa, in the novel's refreshing approach, soon realizes that she'd rather have nerdy Rene for a boyfriend than many of the macho guys she has come across. Soto accurately depicts popularity and stereotypes in high school, while conveying a melting pot of cultures. The teens' struggles shine through with simplicity and authenticity. Soto fluidly incorporates Spanish words into the dialogue (and ends with a glossary). He successfully bridges gender and cultural issues that affect teens, while pinpointing details that portray life in California's Central Valley. Ages 12-up.