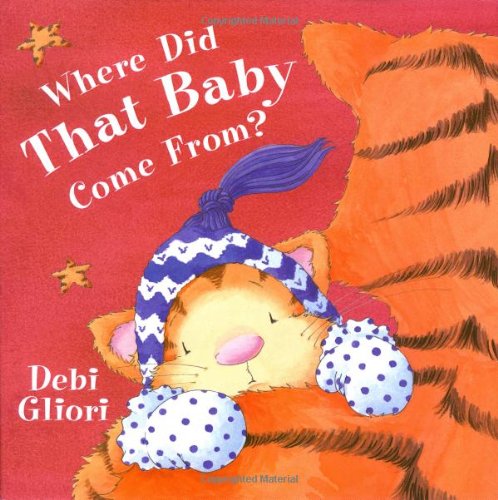 WHERE DID THAT BABY COME FROM?

Rhyming four-line stanzas chronicle Gliori's ( ) tale of a newly minted sibling's misgivings and eventual acceptance of the family's new addition. The narrator, a tiger cub, observes all the mess and nuisance, and ponders the infant's possible origins. Diaper-changing time inspires this reverie: "Where did that baby come from?/ Did you build it with a kit?/ All it can do is pee and poo./ Is there a missing bit?" On this spread, a vignette at right shows the father splattered with poop while the narrator pulls a shirt over his (or her) head; the remainder of the picture depicts the child's imagined scenario of Dad riffling through a box of odds and ends to come up with a cork plug—the "missing bit" he apparently forgot during the baby's assemblage. But the funny speculation that serves to distance the cub from the infant comes to an end when the narrator finds he (or she) is capable of soothing the baby's late-night cries. The final spread tips over the top, as Gliori visually expresses the narrator's epiphany with a gathering of "siblings" from across the plant and animal kingdom (a frog dandles a tadpole; a flower embraces a bulb): "I think our baby comes from/ the place I come from, too," the tiger realizes. "Our place of birth was planet Earth—/ this baby, me... and you." Gliori has often confidently walked the fine line between heartfelt and schmaltzy; here, however, the sweeping concluding statement pushes the book into the realm of the latter. Ages 3-7.