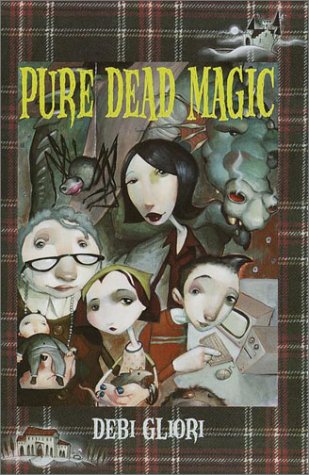 Gliori's () debut novel merges traditional fantasy with high technology; the result is a bit of a conceptual mish-mash with a tangled plot, enlivened by an eccentric sense of humor. In Scottish castle StregaSchloss, the three Borgia children (12-year-old Titus, 10-year-old Pandora and a 14-month-old girl, Damp) find their family in crisis: their father has disappeared, their heartbroken mother is busy at witchcraft school and the pet mythical beasts that live in the dungeon are growing restless. When Pandora borrows her mother's magic wand and loses her baby sister in the modem (the technological practicalities are a stretch) the children must rely on a smart-talking spider to rescue Damp from the information superhighway while they also try to save their father from his evil, elephant-nosed brother. Computer-savvy readers will no doubt be frustrated ("What you've failed to grasp, o leggily-challenged one, is that this is travel. Not travel," says the spider to Pandora, shortly before they actually send themselves, via e-mail, to the nefarious brother's house). Others will wonder why the villain prevents the father from e-mailing the police but allows him to e-mail his family for help. But bathroom humor abounds (dragon diarrhea, a hit-man in a rabbit suit peeing in his outfit) and Gliori's oddball characters are certainly good fun; the book—and its two projected sequels—may charm audiences despite its flaws. Ages 10-up.