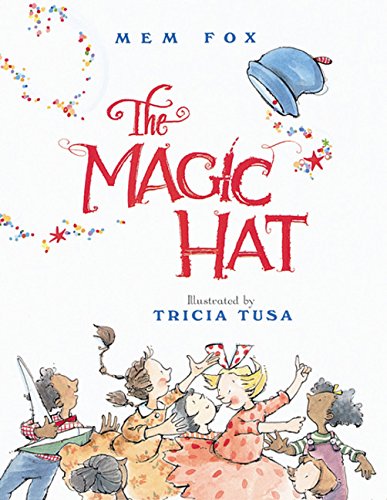 The titular topper of this rollicking, rhyming read-aloud is indeed magic: when it blows into town one day, it plops down on the head of resident after resident, instantly transforming each person into an animal. Each time the chapeau lands, Fox () reprises the refrain, "Oh, the magic hat, the magic hat! It moved like this, it moved like that! It spun through the air…" At this point the author inserts a varying line (e.g., "Like a bounding balloon"; "For a mile and a half"), and a flip of the page reveals what animal the new hat-wearer becomes (in the above instances, a baboon and a giraffe). Kids will eagerly join in the guessing game, which Tusa's () fittingly silly, bustling ink-and-watercolor illustrations whip up into high-octane action. Her clever details add to the clues; for instance, a fruit-stand seller juggles bananas as the hat transforms him into a baboon. A supporting cast of animated children witness the zany goings-on, reacting gleefully to each transformation. These characters' unbridled enjoyment will almost certainly evoke the same response from readers. Ages 3-7.