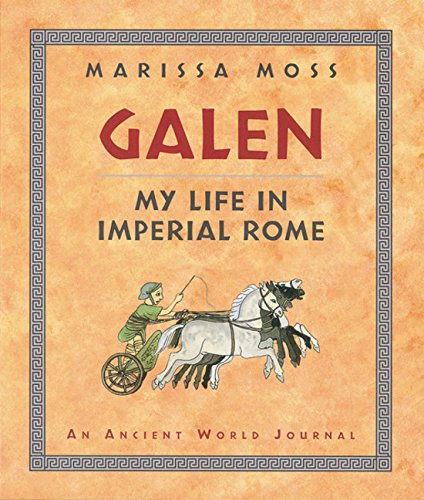 GALEN: My Life in Imperial Rome

Ably balancing fact and fiction, Moss (the Amelia's Notebook and Young American Voices series) uses her signature notebook-style jottings and drawings to launch the Ancient World Journal series. The fresh, diverting first-person account of fictitious 12-year-old Galen, an aspiring artist, describes life as a slave in the palace of Emperor Augustus. As the tale opens, Galen is living with his artist father and brother as slaves of Pollio, a pompous equestrian who bought Galen's father to have him decorate his villa. A dramatic incident occurs while the emperor Augustus visits the villa on his way home to Rome: Pollio threatens to kill Galen's brother when the boy accidentally breaks a treasured wine cup. Augustus, outraged by Pollio's cruelty, buys the family and takes them to Rome with him. The chatty narrator recounts the goings-on in the busy household (which includes Augustus's cold wife, Livia, and his scheming, bullying grandson, Agrippa) while providing a clear, intriguing portrait of ancient Roman life, with such customs as gladiator fights, chariot races and celebrations of the Saturnalia and the feast of Liberalia. Moss's marginal notes in Galen's engaging voice plus his sketches offer insight about food, dress ("Togas are impossible to drape by yourself") and hairstyles. Moss caps this account with Galen's climactic discovery of a plot to poison Augustus so that Iullus Antonius can become emperor. Youngsters will be so drawn into the story that they might not realize how much history they're learning along the way. Ages 8-12.