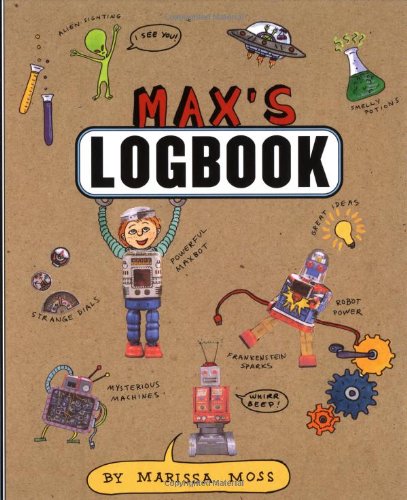 Hand-lettered on graph paper, infused with childlike drawings and collages, Moss's (the Amelia's Notebook series) paper-over-board facsimile of a boy's journal ostensibly spotlights his experiments and inventions (these range from classroom exercises to microwaving marshmallows in order to create "Godzilla Puff" in his kitchen and devising an alarm that will sound when someone enters his bedroom). But the underpinnings of Max's musings are more emotional than scientific (despite the periodic table of elements on the inside front cover). Upset by his parents' frequent arguments, Max fears they are headed toward divorce. He imagines inventing such solutions as a "Prevent-a-Divorce Machine," an "Instant Happiness Robot" and "Hypnodisks" that will force his mother and father to behave as he wishes. There are some silly, irrelevant asides here, e.g., Max's comic strips featuring "Alien Eraser," which imagine the exploits of a pencil-top eraser confiscated by Max's teacher, and Moss doesn't always trust readers to interpret Max's behavior ("I can make my army and alien erasers do whatever I want, but not my parents," Max explains). Even so, the boy's anguish and anxiety will resonate with kids who have faced similar situations, and his gradual acceptance of his parents' eventual separation may well provide solace. Ages 7-10.