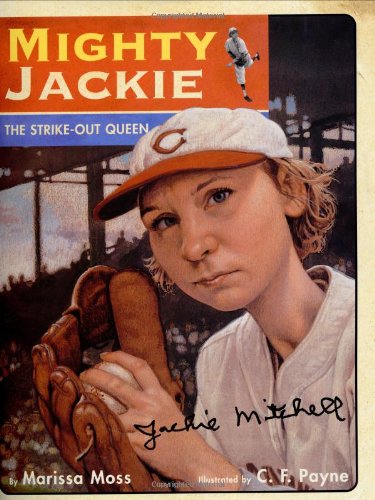 Delivered with the force of a hard fastball, the true story of athlete Jackie Mitchell makes a strong addition to Moss's ( ) library of brave girl tales. Payne ( ) sets the stage with photo-real, fish-eye–distorted spreads of Jackie as a child, hurling baseballs long after nightfall and getting tips from Dodgers pitcher Dazzy Vance. Moss relays the details of then-17-year-old Jackie's April 2, 1931, game against the two best hitters of the day—Babe Ruth and Lou Gehrig—with the blow-by-blow breathlessness of a sportscaster and the confidence of a seasoned storyteller: "Jackie held that ball like it was part of her arm, and when she threw it, she knew exactly where it would go." Payne's pictures mirror the text's immediacy. Close-ups show Ruth's face as he awaits Jackie's first pitch, then later his expression of dismay and outrage as the umpire calls " " Jackie disposes of Gehrig even more expeditiously, and the story ends as she basks in the cheers of fans who had jeered her only moments before. The wind seeps out of this jubilant moment when readers old enough to understand the end note discover that Jackie was immediately removed from her team and banned from baseball (the commissioner claimed his decision was for her own protection, as baseball was "too strenuous" for women, according to an author's note). Yet the drama of her two memorable strike-outs has a mythic dimension, and girls with sporting aspirations will be thrilled by Jackie's legacy. Ages 5-8.