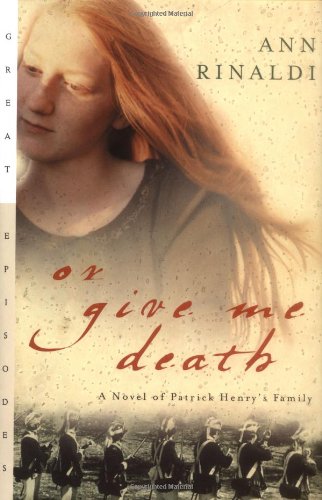 OR GIVE ME DEATH: A Novel of Patrick Henry's Family

This often gripping but also melodramatic novel set just before the Revolutionary War explores Patrick Henry's tragic domestic life, from the point of view of two of his daughters. Patrick's wife, Sarah, is "mad"—in the opening scenes, she tries to drown their infant son. As Patrick travels extensively, "to talk about the new evils sent to us by the king," 16-year-old Patsy, the oldest child and the first narrator, is left to cope with his disregard for "the evil going on here at home under his own roof." It falls to Patsy (and her intended, MyJohn) to investigate the institution someone recommends and, when it proves barbaric, to contrive for her father to confine her mother to the cellar. Throughout, Patsy must run the household and supervise her four youngest siblings, albeit with the help of slaves. Rinaldi () effectively switches narrators midway through, when she adopts the voice of spirited middle sister Anne, who chafes under Patsy's tyrannical rule and the web of household secrets. While the portrayal of Patrick Henry is unusually complex, the author romanticizes Sarah's illness. For example, the unstable woman's pleadings get credit as the source of Henry's most famous line ("Give me liberty or give me death!"), and the plot hinges on the device that Sarah is both prophetic and recognized as such by her daughters. Some young readers may enjoy the supernatural overlay; to others, it may cloud an otherwise perceptive view of the dynamics of a family in distress. Ages 10-14.