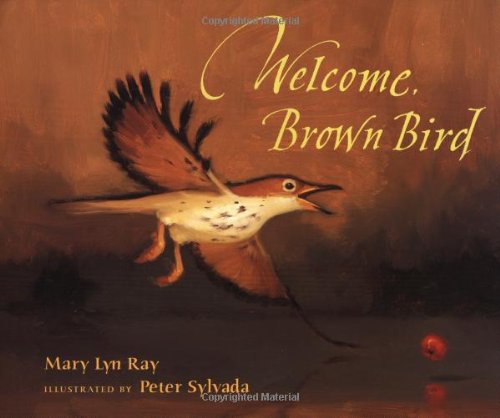 Every fall, a wood thrush says goodbye to a boy in the northern hemisphere and flies thousands of miles south to greet a boy in the southern hemisphere. Both boys wait every year for the bird, and with childlike earnestness both convince their fathers not to clear trees in the woods where the bird sings. The boy in the distant country speaks Spanish, but he says the same things as his English-speaking counterpart in the North—his words (" ") are perfectly clear in context. Ray ( ) has conceived an expressive metaphor for the interconnectedness of living things, even those unknown to each other: "Neither boy knew where the brown bird went," the text ends. "Only the bird knew they were brothers." Sylvada ( ) paints a series of landscapes in which mood and light predominate. In pointing up the similarities between the boys, their fathers and their farms, the images leave out particulars of textures and facial features; and the same mustard, brown and sky-blue palette is used for both settings. Within the story, the ending is a happy one—one boy's happiness always follows the other's loss—but a sober afterword explains Ray's concern for the headlong destruction of songbird habitats. Its pared-down focus on a single issue makes the book an effective discussion-opener for younger listeners. Ages 3-7.