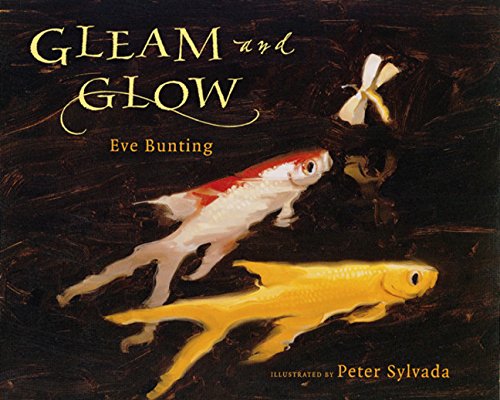 Sylvada's () eerie autumnal oil paintings provide the emotional backdrop for another Bunting tale of a family forced into exile (). After Papa leaves to join the underground in his war-torn country, life for the eight-year-old narrator, Viktor, his five-year-old sister, Marina, and their mother grows increasingly grim. "Every day we heard distant gunshots and saw smoke rise into faraway skies," while strangers fleeing the conflict share terrible stories. The only bright spot is the pair of goldfish one refugee leaves behind. Marina names them Gleam and Glow and dotes on them. But when the threesome finally departs for the border, they must leave the fish behind, so Viktor releases them into the family's pond. After a long stay in a refugee camp and a tearful reunion with their father, the family returns to find their home devastated but the pond full of fish, "as shimmery and dazzling as melted gold." This image of hope and renewal strikes a strong keynote in Bunting's bittersweet story (inspired by true events in the Balkans, she explains in an afterword). The narrative brims with poetic similes while Sylvada's thick brush strokes and somber palette produce images that are at once stark and dreamlike. The artwork reveals the bleakness of both landscape and emotions in a time of war. Ages 6-9.