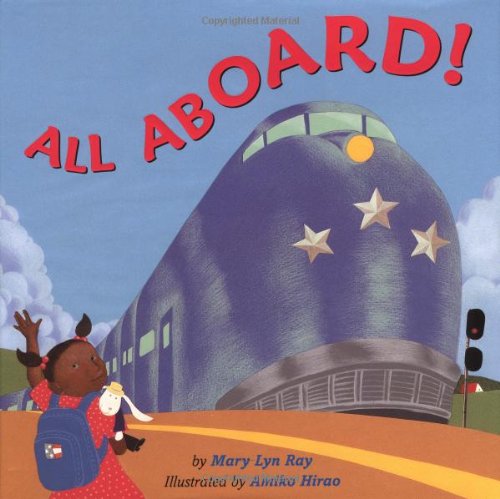 Although the heroine of this tale is never mentioned in the text, Hirao () shows her waiting at the station with her mother, carrying a stuffed white rabbit in her backpack. Riding by herself on an overnight train to meet her grandparents, the girl finds comfort in imagining that her stuffed rabbit, Mr. Barnes, is a human-sized, confident rider of the rails, and that all the other passengers are animals. Mr. Barnes, dressed in a dapper purple suit, becomes the girl's mentor in navigating the amenities of a sleeper car, proper etiquette in the dining car and passing the time. With pleasingly repetitive, elliptic prose, Ray () emulates the rhythm of the rails. When a freight car flashes by, it makes a staccato impression: "Boxcar, coal car, tank car, flatcar. Red red yellow green yellow yellow blue green." The child's observations rock back and forth, trainlike, between pretend and reality. For instance, when Mr. Barnes looks out the window, he "likes to see the between. The between where he's come from and where he goes to." Hirao's cut-paper and colored-pencil illustrations take the girl's reveries to their fully imagined possibilities. The train's exterior becomes a silver tube gracefully undulating through rolling countryside and around a glamorous city at night, "strung with lights... like a tug of dreams on a river. Only the engineer sees. And maybe someone who watches, awake, out a window." Here readers view the rabbit and girl companions peering out at a diner, billboards and a yellow cab. The skewed angles of the train's interior comically emphasize how the cramped, swaying quarters creates a dense but genial community of travelers (a giraffe in business attire talks on a cell phone and works on a laptop, a mole reads ). Upon the girl's safe arrival, Mr. Barnes shrinks back to toy size; readers, however, will undoubtedly want him to grow again for a return trip—and soon. Ages 4-8