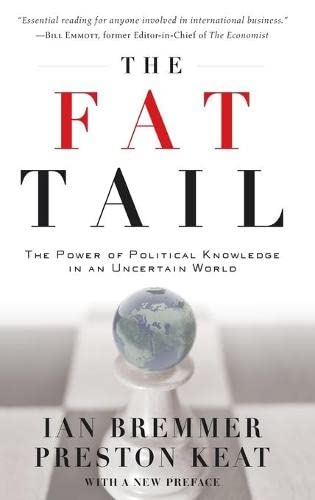 The Fat Tail: The Power of Political Knowledge in an Uncertain World

Bremmer and Keat, executives at Eurasia Group, explore how global political risks influence the business world in this cogently argued analysis. The book details key areas corporations must be wary of in order to survive in the new global economy including foreign laws and regulation, government changes, civil unrest, expropriation, terrorism and war. With excellent examples, the authors demonstrate how planning for such political developments may make or break a company. It's the difference between Morgan Stanley and the Bank of New York in the aftermath of the September 11 terrorist attacks. Both companies had large offices in or near the twin towers. Morgan Stanley had an emergency plan and the Bank of New York didn't; one suffered minor disruption and the other suffered extreme loss of business momentum. These persuasive case studies want for a clearer summary of how to actually implement plans that fortify companies in such situations. This is not a field guide but a sketch of the landscape, not a consulting session but an overview. It remains for the individual or corporation to take the initiative to further pursue the assessments needed to mitigate any risk.