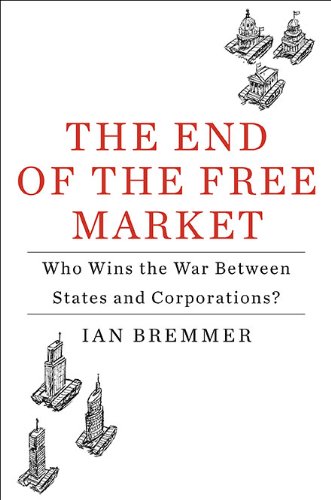 The End of the Free Market: Who Wins the War Between States and Corporations?

“The power of the state is back,” announces Bremmer ( ), president of the Eurasia Group, in this sobering examination of the threat the emerging powers of China, Russia, and Saudi Arabia pose to the free market. The book presents a whirlwind history of capitalism from mercantilism through the end of the cold war to the ascendancy of “state capitalism,” a political and economic arrangement in which states exert their influence over markets and big business to serve their own interests. Bremmer provides informative case studies of economies with varying degrees of state control: Algeria's authoritarian regime, Mexico's relatively open and democratic system, and China, the “leading practitioner of state capitalism,” in which Beijing has assumed only more economic power in the wake of the financial crisis. He weighs how free market economies can compete and concludes on a hopeful note, laying out a powerful case for the superiority of regulated free markets above state capitalism and a clear prescription for how the U.S. can defend its competitive advantage in the future.