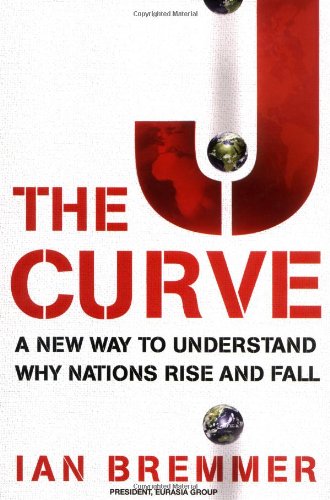 The J Curve: A New Way to Understand Why Nations Rise and Fall

With this timely book, political risk consultant Bremmer aims to "describe the political and economic forces that revitalize some states and push others toward collapse." His simple premise is that if one were to graph a nation's stability as a function of its openness, the result would be a "J curve," suggesting that as nations become more open, they become less stable until they eventually surpass their initial levels of stability. In other words, a closed society like Cuba is relatively stable; a more open society like Saudi Arabia is less so; and an extremely open society like the United States is extremely stable. Bremmer expertly distills decades—sometimes centuries—of history as he analyzes 10 countries at different positions on the J curve. North Korea is perhaps the most disturbing example of the left side of the curve, where a closed authoritarian regime produces effective stability; on the right of the curve sit stable countries like Turkey, Israel and India. This leads Bremmer to conclude that political isolation and sanctions often work against their intended resultsand that globalization is the key to opening closed authoritarian states. Bremmer persuasively illustrates his core thesis without eliding the complexities of global or national politics.