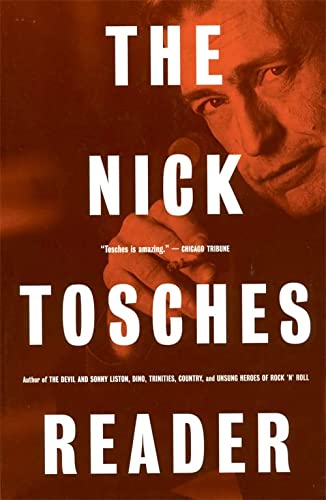 Tosches is best known for his 100-proof biographies of Dean Martin and Jerry Lee Lewis, and his beautifully trenchant life of the prize-fighter Sonny Liston (see review above) will arrive to the timely accompaniment of this collection from his diverse writing career, showing Tosches to be more than a gifted, dogged chronicler of flawed public figures. The Reader contains more than 100 pieces, including excerpts from the author's nonfiction, his two novels (Cut Numbers, Trinities), dozens of magazine pieces that appeared in such publications as Rolling Stone, Esquire and Vanity Fair (to which Tosches is now a contributing editor) and riffs on Charles Olson's Maximus Poems, Sinatra's voice, Miles Davis's horn, Carly Simon's mouth and ""The Singer Madonna Arraigned by the Ghost of Pope Alexander VI."" While these pieces, taken together, show the arc of a successful career, they also give a glimpse of a period in magazine writing that is long gone, in which hell-bent editors such as Lester Bangs would assign a review of a new album and the reviewer could simply talk about how the packaging felt in his hands. Tosches, early in his career, paid his bills with small fees garnered as a music critic, and this lively era of no-holds-barred journalism (later to be dubbed ""New"") is on raunchy display here. Creem asked Tosches to interview Patti Smith, and the rock-poet says, ""Hell, Nick, you know me. Just make it up."" And he does. In Rock magazine, he reviewed an album that never existed (""It is indeed quite difficult to approach this album with the pedestrian sensibilities that suffice for most musical creations""). The term ""pedestrian"" will never be applied to Tosches--neither in his interests nor his prose style. In this carefully constructed collection, for which Tosches provides contextual links and anecdotes about the composition of each piece, readers will get a complex and satisfying portrait not only of a time but of a deeply reflective and probing writer who, beneath the din of music and gangsters and poseurs, hears what he calls ""the wisdom and power of silence and wind."" (Apr.)
close
Details