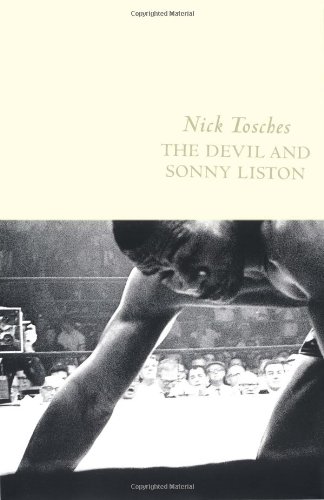 The Devil and Sonny Liston

Tosches has always been drawn to the lives of dark and mysteriously flawed or fallen public figures--Jerry Lee Lewis in Hellfire, Dean Martin in Dino--and in one-time heavyweight champ Charles ""Sonny"" Liston he has found his biggest and darkest figure yet. Born in abject poverty in eastern Arkansas, Liston grew up to be a quiet, inarticulate youth who, after moving with his mother to St. Louis, put his only talent to work: intimidation. Knocking over gas stations and grocery stores, he ended up in a penitentiary doing eight years. His brawny build and huge hands made him an invincible force in the prison boxing program, which earned him an early release but delivered him into an enslavement from which he never escaped. Tosches marshals prodigious research to prove that, early on, Liston became captive to organized crime at a time when boxing was ruled by a mob syndicate. This is a very sad tale of an illiterate man who became useful to figures who had their own agenda: making money. Tosches finds people close to Liston who claim the fighter told them that his first bout with the man then known as Cassius Clay was fixed (with the mob taking down $2.1 million by betting on the 7-to-1 underdog); others strongly imply that the outcome of the second fight--that of the infamous ""phantom punch""--in Lewiston, Maine, was also a foregone conclusion. Events around the beleaguered and bewildered Liston whirl at dizzying speeds--the Kefauver investigation of boxing, the war in Vietnam, the rise of the Nation of Islam, the cultural roar of the 1960s generation--and Tosches is a master at keeping his finger on the pulse of the period and his eye on the pitiable Sonny. Throughout, though, what is most remarkable is Tosches's empathy for the fighter derided as ""a bear,"" a ""hoodlum"" and, by the loquacious Ali, as simply ""ugly."" In Tosches's hands, Liston is an unfortunate victim of people much worse than he, and the boxer emerges with a kind of mute dignity: this man ""who neither knew his age nor felt any ties of blood upon this earth nor saw any future knew only that he was nobody and that he had come from nowhere and that he was nowhere."" In a prose style that runs like a hot improvisational jazz riff, Tosches makes a somebody of a nobody, and along the way brings more than a few reputations down a good notch. (Apr.)
close
Details