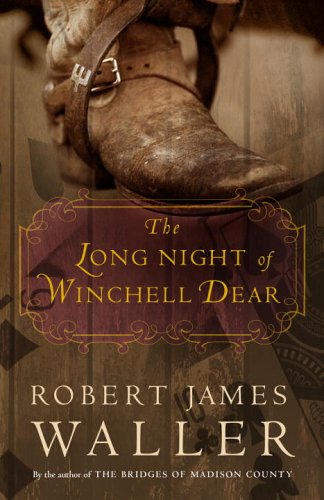 The Long Night of Winchell Dear

Waller, of fame, takes readers to the unforgiving terrain of south Texas in his 10th novel. Seventy-seven-year-old Winchell Dear has made a good life for himself as an honest poker player, including acquiring his 45,000-acre ranch (named "Two Pair" in honor of the hand he bluffed to win the land). So when his gambler's sixth sense tells him trouble is in the air, Winchell tucks a gun into his boot and waits out whatever's on the way. Meanwhile, a Mexican drug mule hurries to meet his connection, Sonia Dominguez, who also works as Winchell's housekeeper; a diamondback snake that proves pivotal to the plot slithers through the scrub grass; Peter Long Grass, a Native American squatting on the ranch, watches everyone from the shadows; and a pair of hit men in a cream-colored Lincoln Continental approach Two Pair. Connections between the characters—some more believable than others—are revealed as the story builds toward a violent climax. Though the prose tends toward the awkward ("Under kitchen lights reflecting off walls of dark wood and partially absorbed and mellowed almost to amber by that effect..."), Waller's fans will enjoy his take on the Old West meeting the New.