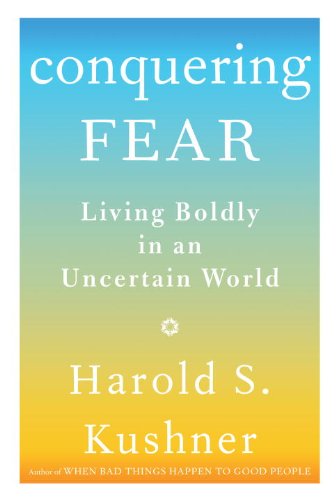 Soon after his international bestseller appeared in 1981, Kushner stopped being a congregational rabbi in order to devote full-time to writing and lecturing. , his 12th book, is the latest result of this concentration. It is a popular theology primer designed to help readers grapple with common problems of suffering, significance, disappointments, guilt, forgiveness and conscience. Although traditional Jews object to Kushner's view of suffering as reflecting God's limited capacity to control the hazards of life, his books have won general acclaim. The fears that Kushner tackles include terrorism, natural disasters, rejection, growing old and death, among others. His recommendations for coping require trust, religion, hope, courage, faith; he also urges living with purpose and differentiating between God and nature. Some readers may find Kushner's prescriptions to be inspiring; others will see them as banal platitudes. A useful idea he offers about fear of terrorism is “be alert but not frightened, vigilant but not paranoid.”Perhaps his least helpful advice is about the fear of death: “The most important thing to remember is not to be afraid.”