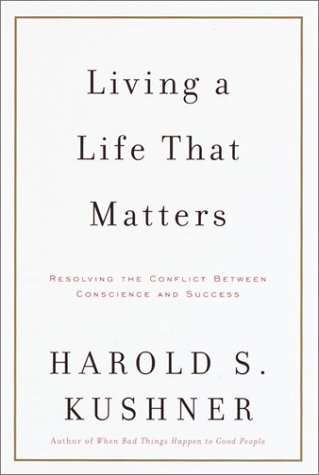 LIVING A LIFE THAT MATTERS: Resolving the Conflict Between Conscience and Success

Rabbi Kushner (, etc.) outlines a common human struggle between the need to feel successful and the need to think of oneself as a good person. Indeed, he relates, the biblical Jacob wrestled with the impulse to succeed through cleverness and fraud, and "to become someone exemplary." While the subtitle might be challenged—can't success be more a matter of dedication than ruthlessness?—Kushner's wide-ranging, occasionally meandering book fortunately focuses more on the basic question of a meaningful life. Citing examples from both contemporary life and the Bible, he observes that revenge and retribution cannot heal victims, whereas the new trend toward restorative justice (which works "toward the... restoration of the victim" and holds "the offender accountable") might do so. Kushner sees Isaac Bashevis Singer's character Gimpel the Fool as achieving the utmost integrity because he is "the same person all the time." Love and friendship, Kushner writes, not only signify bonds between people, but help bring God into a selfish world. To avoid feeling insignificant, he urges readers to help someone needy and to think not of themselves but of the next generation. He concludes with words that are more comforting than challenging: simply "[b]y being good people"—doing honest work, helping a neighbor, delighting a child—"we have an impact on the world."