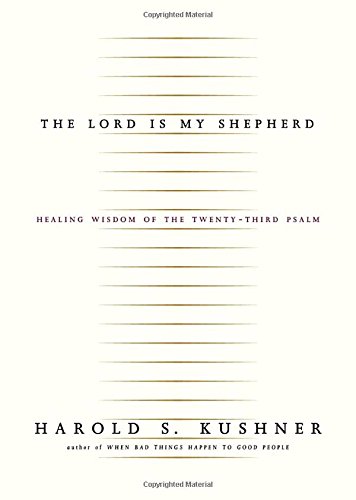 THE LORD IS MY SHEPHERD: Healing Wisdom of the Twenty-third Psalm

Many people regard the 23rd Psalm as one of the most familiar and comforting passages in the Bible. Rabbi Kushner, bestselling author of the spiritual classic , looks to the psalm as a microcosmic statement about God—its 57 Hebrew words, he says, present "an entire theology" about life and loss. The psalm begins in a place of perfect peace—the psalmist lacks for nothing, and is tended perfectly by God the shepherd—but that peace is shattered by "the shadow of death." Going phrase by phrase through the psalm, Kushner tackles serious questions: what does it mean to lack for nothing? Where is God when we suffer? Some of his interpretations are quite fresh and interesting; for example, "the straight paths" in which God leads the psalmist are anything but straight, he claims, noting that the Hebrew is more accurately rendered "roundabout ways that end up in the right direction." Ultimately, that phrase's message is about trusting God when the way does seem straightforward. The psalm is not Pollyannaish, but realistic: as Kushner points out, the psalmist has enemies, has known failure and has probably lost a loved one. He draws heavily on rabbinic Judaism, but also references popular culture (including Woody Allen films), Freud, Michelangelo and other diverse sources. Kushner writes well and engagingly, and his tone will make readers feel personally welcomed into the rabbi's study for a comforting one-on-one chat.