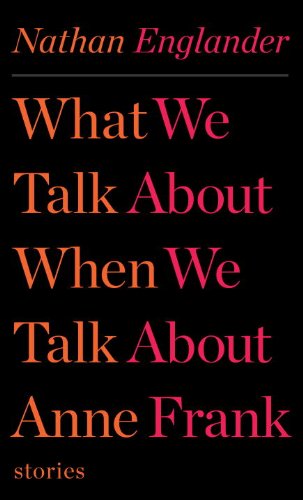 It’s a tribute to Englander’s verve and scope that the eight stories in his new collection, although clearly the product of one mind with a particular set of interests (Israel; American Jewry and suburbia; writing and reading; sex, survival, and the long shadow of the Shoah) never cover the same territory. Each is particular, deeply felt, and capable of pressing any number of buttons. The title story, which features a reunion of old friends, a lot of marijuana, and a series of collisions between Israel and America and Orthodoxy and laxity, starts out funny and gets funnier, until suddenly it’s not a bit funny. “Sister Hills” traces an Israeli settlement from its violent founding to its bedroom community transformation and reads like a myth, simple, stark, and, like many a myth, ultimately horrifying. And as you spend a few days with the beleaguered director of “Camp Sundown,” a vacation camp for elderly Jews, you’ll find, as he does, that things you think you’re sure about—guilt, justice, silence, and the morality of revenge—start to get fuzzy. What we talk about when we talk about Englander’s collection turns out to be survival and the difficult—sometimes awful, sometimes touching—choices people make, and Englander (For the Relief of Unbearable Urges), brings a tremendous range and capacity to surprise to his chosen topic. Agent: Nicole Aragi, Aragi Agency. (Feb.)
close
Details