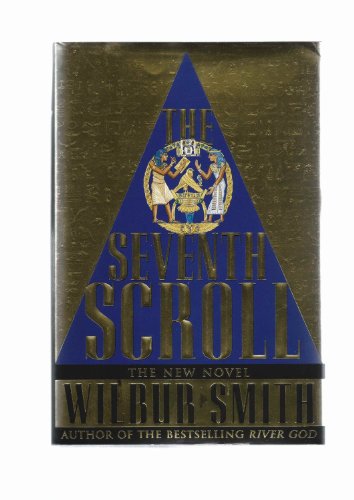 A search for the 4000-year-old tomb of an Egyptian pharaoh along the Nile's headwaters in Ethiopia is the focus of this intoxicating sequel to River God. A heady mix of exotic adventure, romance and Egyptology, it pairs blueblood, devil-may-care Sir Nicholas Quenton-Harper, who recently has lost his wife and children in a tragic accident, and half-English, half-Egyptian archeologist Royan Al-Sima, herself recently bereaved, in a desperate race to unearth Pharaoh Mamose's fabulous treasures. Their rival in this quest is Gotthold von Schiller, an old, crazed, murderous German collector of antiquities whose mistress, a porno actress, dresses up as an ancient Egyptian queen to titillate him. The major clue is the eponymous seventh scroll, key to the tomb's location, written by ancient Egyptian scribe Taita, who figured prominently in River God. As the novel opens, thugs hired by von Schiller steal the scroll, and thereafter the rival archeologist teams play a cat-and-mouse game with Taita across the millennia, avoiding lethal traps and deciphering red herrings, which will fool the reader too. The colorful cast includes alcoholic ex-KGB operative Boris Brusilov and ruthless Texan Jake Helm, von Schiller's slavish sidekick. Fans of intricate adventure and Egyptian lore will be captivated by Smith's capacious saga, which should serve to increase his audience in the States. This prolific and popular British writer-with 24 previous novels, he is a bestseller in England and elsewhere, to the tune of 65 million copies-is a master of the genre. 250,000 first printing; $250,000 ad/promo. (Apr.)
close
Details