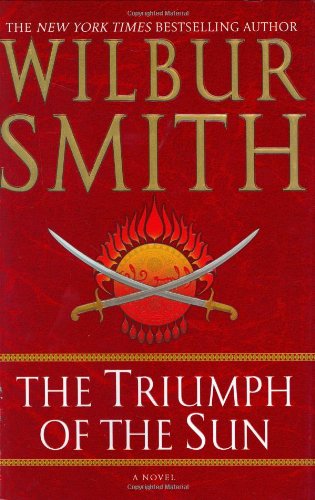 The Triumph of the Sun

Set in colonial Egypt at the end of Victoria's reign, this sweeping romantic epic reprises Smith regulars—scions of the Courteneys and Ballantynes. (The two fictional British families have provided character fodder for least half of Smith's 30 novels.) Bloodthirsty legions of Arab dervish troops under the command of the Mahdi, or ruling successor to the Prophet Muhammad, have surrounded (but not taken) Khartoum, trapping comely 17-year-old Rebecca Benbrook; her consul general father, David; and her younger twin sisters, Saffron and Amber. The appearance of a cargo boat owned by the dashing, entrepreneurial Ryder Courteney, as well as the subsequent appearance of Capt. Penrod Ballantyne of Her Majesty's 10th Hussars, give hope. Naïve Rebecca falls in love with Ballantyne, who deflowers her before racing off to warn the rescue force commander that the commander is outnumbered 25 to one. The dervish, led by the fearsome Emir Osman Atalan, overrun Khartoum, and Rebecca's father is brutally butchered; the saga continues with Penrod heroically leading troops against Osman. Steamy romance alternates with gore, and it's all done by-the-numbers in a good way—like a junky, absorbing miniseries. Fans will not be disappointed.