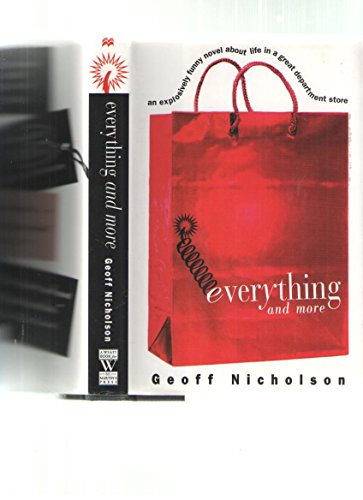 An off-beat tale with a sardonic edge, Nicholson's brightly lit black comedy takes place in Haden Brothers, a monstrous London department store that is a combination of Harrod's, Kafka's Castle and the Marx Brothers' The Big Store. Arnold Haden, the last surviving Haden brother, has a weakness for nubile shop assistants and, as the novel opens, believes that the brittlely efficient Vita Carlisle, who has been avoiding his attentions, has finally succumbed when she agrees to come to his penthouse apartment (located atop the giant store). But when Arnold finally gets a peek under Vita's skirts, he finds ``three sticks of dynamite... and a tangle of electrical wiring that leads to a switch located by her navel.'' Vita threatens to blow up the store-and she won't, initially, tell Arnold why. So begins a highly literate and bawdy assault on the principle that all things, including people, have exchange values. The book's spirit is epitomized by the third major character, Charlie Mayhew, a lowly furniture porter and failing artist, who not only longs for Vita but also admits, in an early monologue: ``So I thought to myself, why not structure a book like a department store?'' Arnold, Vita and Charlie proceed to undergo reversals of fortune as though stuck in a revolving door of a plot. Along the way, disquisitions on makeup application, kleptomania and bomb-threat etiquette stock an episodic narrative that makes stops in chapters named after store sections and saddled with double entendres: Yarns, Bedding, First Aid; Toiletries, Accessories, Exhibitions. As, individually, the three main characters discover the great dark secrets of the department store (and they are over-the-top dark), Nicholson (Hunters and Gatherers) maintains enough verbal resourcefulness to rescue his story from its occasional predictability, delivering an exhaustively entertaining farce and one of the better satires of Thatcherite consumerism. (June)
close
Details