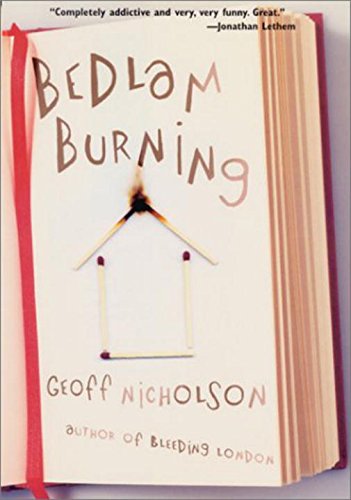 The English comic tradition has always shown a fine weakness for a little lunacy, and Nicholson's 13th novel (after , a Whitbread Prize finalist) is the latest variation on that theme. Michael Smith is a handsome Cambridge graduate working a dead-end job at a rare book dealer's in the mid-'70s. Fellow grad Gregory Collins has written a novel and wants to use Michael's picture for the author photograph. The hoax gets more complex when Gregory persuades Michael to continue the imposture by giving a reading of the novel at a Brighton bookstore. In the sparse audience, which includes Michael's disapproving girlfriend, Nicola, is a gorgeous psychiatrist, Alicia Crowe, who persuades Michael-as-Gregory to be writer-in-residence at a local lunatic asylum. Michael accepts for two reasons: he's bored at the bookstore and wants to bed Alicia. The real Gregory approves, partly because he's slept with Nicola. Michael finds the Kincaid Clinic to be as strange as one would expect, and his attempts to turn a colorfully psychopathological crew into creative writing students eventually bears prolix fruit. He also discovers the dubious joys of making love to Alicia, who is a coprophemic—a dirty talker. Michael finds Dr. Kincaid's extreme regulations unsettling: Kincaid bans pictures, photographs and drawings from the asylum, because, as he explains, the patients "have all seen too many images." The fragile situation begins to fall apart when a selection of the inmates' writing is actually published. The ensuing attention blows Michael's cover, but will his former Cambridge professor, John Bentley, unmask him? Nicholson's book, like a episode, delightfully stretches sanity to its farcical breaking point.