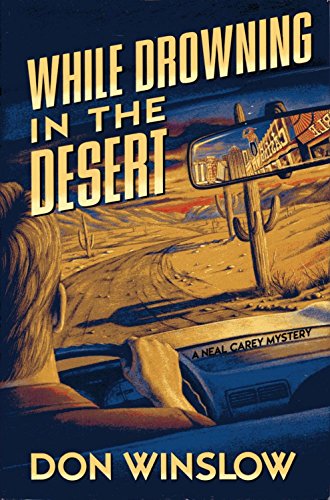 While Drowning in the Desert

In yet another slapstick mystery, Neal Carey (A Long Walk Up the Waterslide, 1995) is driving across the Nevada desert with the aging, legendary comedian Natty Silver yakking his vaudeville shtick nonstop. Neal is taking Natty home to California from Vegas, but a couple of no-goodniks are after Natty, and the old man won't say why. Chaperoning Natty is hard--he won't shut up, except when he tries to get away and get laid. The bad guys are Heinz, a German money-launderer, and his Lebanese sidekick, Sami, who's dumber than wood. Meanwhile, Neal's girl, Karen, is in a raging hurry for marriage and motherhood; and Hope White (billed as ""The Great Hope White""), a Vegas performer no longer as young as she once was, is rekindling an old torch for Natty. The principal players take turns hogging the narrative, and soon everyone converges for the big dramatic showdown, with the damsels predictably imperiled by Heinz. Okay. Maybe it's not that dramatic. Winslow's style isn't flashy, and his notion of suspense is downright laughable. Yet he has a way with crisp dialogue (or, in Natty's case, monologue), and the laughs keep coming. Neal isn't a tough guy, but he's pretty lucky. Lucky enough to find water in the sand and ferry the irascible Natty, who claims to have taught a young Lou Costello ""Who's on First,"" to safety. (June)
close
Details