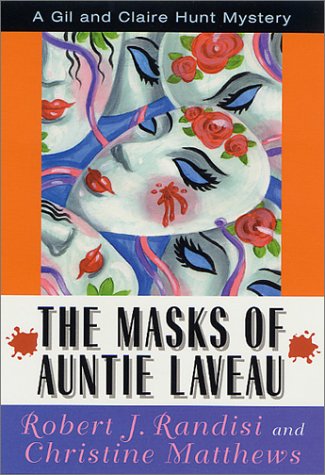 THE MASKS OF AUNTIE LAVEAU: A Gil and Claire Hunt Mystery

St. Louis–based amateur detectives Claire and Gil Hunt get mixed up in an intriguing mystery of murder, kidnapping and voodoo in their second outing (after 1999's ) from Randisi, author of the Joe Keough, Nick Delvecchio and Miles Jacoby series, and poet and playwright Matthews. A business trip for her TV show takes Claire and Gil to New Orleans, where the beignets are delicious and the music from Bourbon Street plays through the night. But the spell is broken when Claire's prospective client, a mask-maker who calls herself "Auntie Laveau," arranges to meet Claire in a historic graveyard and later turns up dead. Connected to Auntie Laveau by notes found at the victim's home, Claire and Gil reveal all they know to the authorities before going back to what they hope will be a normal life in St. Louis. When the New Orleans police ask them to return and identify a comatose woman, Gil embarks at his peril on a trip that will lead him further into the bizarre world of voodoo, which proves to be as much a part of the Big Easy as jazz, gumbo and Mardi Gras. Hexes, potions and spells interweave with vivid settings, two delightful sleuths and credible supporting characters, from Marie Laveau, the original Voodoo Queen, to her 21st-century counterparts. One can only hope that the concluding vow Claire and Gil make not to become involved in another mystery is short-lived.