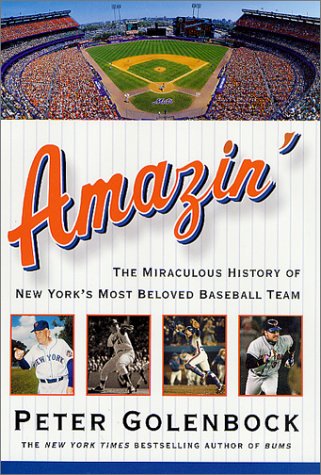 As he did in , his oral history of the Brooklyn Dodgers, Golenbock presents a chorus of voices recounting the successes and notorious failures of one of the most colorful teams in baseball history. Golenbock begins with the Giants and the Dodgers and what impact their hijacking had on the city. Baseball finally came to its senses, and the New York Metropolitans came into existence for the 1962 season. One hundred and twenty losses later, the season ended in Chicago with a triple play, a fitting tribute to their still-standing record of futility. The strange thing about the early Mets was that the more they lost, the more the fans loved them. Golenbock combines his own well-researched commentary with the recollections of eyewitnesses. All the personalities are here: Casey Stengel and Marvelous Marv Throneberry, fondly recalled by utility man "Hot" Rod Kanehl, and their first all-star, Ron Hunt. Outfielder Ron Swoboda and pitcher Jerry Koosman reminisce about the Miracle Mets of 1969, while Daryl Strawberry and Keith Hernandez wax nostalgic about the Mets' next World Series win, 17 years later, recalling every crucial play with nail-biting suspense. Strawberry talks candidly about his drug use and his conflicts with teammates and managers, and the author addresses the general dissipation of so many players in the 1980s. Golenbock includes lively testimony not only from ex-players, but sports writers like Robert Lipsyte, the late poet Joel Oppenheimer, front office personnel and regular fans. This is a delightful and painstakingly detailed trip down memory lane that Mets fans will cherish.