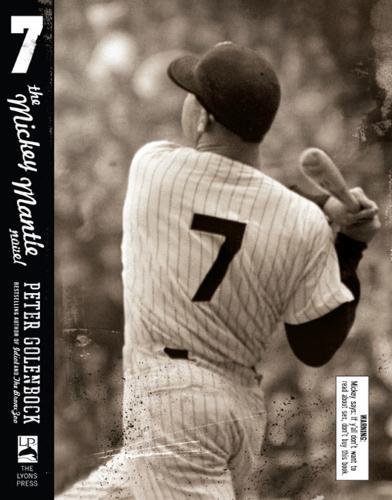 This book would make Henry Miller blush. Golenbock, author of many sports books, has written a novel about baseball great Mickey Mantle. It takes place in heaven, where Mantle, talking with dead baseball writer Leonard Shecter, coauthor of , recalls his three favorite things in life: "puss," booze and, lastly, baseball. Mantle is the first-person narrator and in the first half of the book takes us on a hedonistic yet misogynistic ride. There are stories of him and fellow teammate Billy Martin and their endless pursuit of women, in bars, on ledges outside of hotel rooms, in dark movie theaters, with telescopes and while signing autographs ("We'll sign your balls if you'd... play with ours"). Mickey seems more of the gentleman ("I don't believe in having sex with women against their will the way Billy sometimes did"), but the quest for sex is endless. Perhaps the most controversial part of this book will be the part about Mantle supposedly bedding Marilyn Monroe while she was married to Joe DiMaggio. In a scene where Mantle prematurely ejaculates and Monroe is "frigid," Mantle pronounces Marilyn "a lousy lay." Dropped into the book apparently randomly are samples of Mantle's sophomoric humor ("How can you tell when two lesbians are twins? They lick alike") that are sometimes downright offensive. The second half of the book looks at Mantle's impressive Hall of Fame career, but no one will be talking about that. This is not a book to give to your favorite nephew. In fact, it will be interesting how Mantle's fans will receive it—as an insult to their hero? or a prurient look at the Mick that they can't help themselves from buying?

Note: This review is based on a galley received under the Regan Books imprint of HarperCollins; the book occasioned a firestorm of controversy and was contributory to publisher Judith Regan's firing and the cancellation of the book, since picked up by Lyons. The text of the book is unchanged.