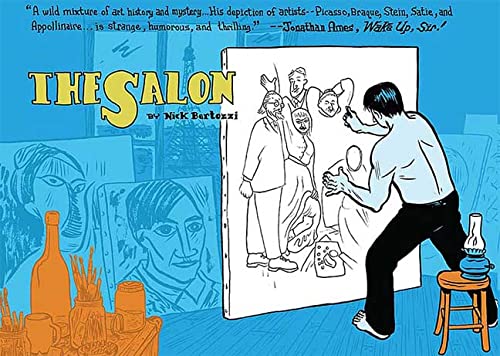 Bertozzi's long-awaited graphic novel has a brilliant, daffy premise executed with wit and flair. In the Paris of 1907, a salon of later famous Modernists—including Gertrude Stein, Georges Braque, Erik Satie and their sawed-off, potty-mouthed, frequently naked, hilariously arrogant acquaintance Pablo Picasso—discover a stash of secret blue absinthe that allows its drinkers to travel inside paintings, which may hold the key to the demonic creature who's been dismembering avant-gardists. The setting is fertile territory for speculative historical in-jokes, bawdy and action-packed set pieces—especially artistic experimentation in the tradition of its protagonists—Bertozzi plays it to the hilt. His artwork is consistently vigorous, featuring rough, lusty brush strokes, an engaging duotone color scheme that changes from scene to scene, and hilarious mock French sound effects (someone being kicked is rendered "QUIQUE"). But there's also a clever subtext to the book, about the historical moment at which a small group of associates reinvented art, music and literature by thinking intensely about how to represent space and time. Bertozzi dramatizes the origins of Cubism and its links to Gauguin's work, and even suggests how Picasso might have been influenced by comic strips, thus demonstrating the Stein salon's absolute devotion to advancing their art more strikingly than a "real" history could.