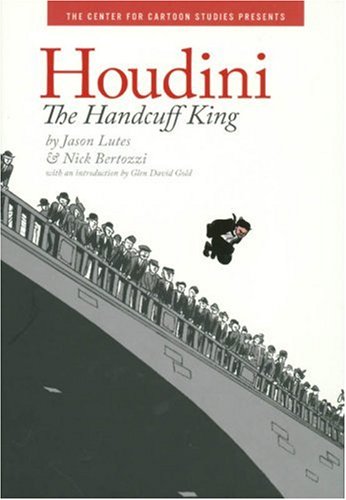 A single stunt from the sprawling career of the "handcuff king," Harry Houdini ("The man for whom the phrase 'kids, don't try this at home' might well have been invented," reads Glen David Gold's introduction), is the lynchpin of this brief, elegant book. But the authors intimate larger, at times darker themes (true love, arrogance, anti-Semitism) lurking around the outer edges. Houdini is an insecure man obsessed with fame, but also a faithful and devoted husband. As the story opens on May 1, 1908, he is preparing for a handcuffed jump from Harvard Bridge, chafing at badgering reporters and a flock of imitators who are stealing his tricks. Illustrations show him preparing to defeat the handcuffs, and wordless panels ultimately allow readers to witness the escape process in its entirety. Houdini himself comes off as a flawed but respectable man, whose principles make him both exceptional at what he does and difficult to be around. Several pages of historical notes fill in the details. Lutes and Bertozzi successfully offer a tiny snapshot as a way into a very large life. Ages 10-up.