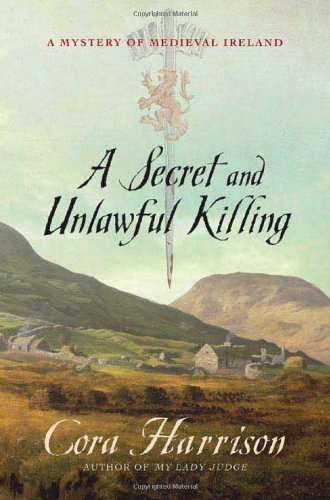 A Secret and Unlawful Killing: A Mystery of Medieval Ireland

In Harrison's captivating second mystery set in the 16th-century kingdom of the Burren in western Ireland (after 2007's ), the murder of an arrogant steward, Ragnall MacNamara, leaves a wide field of suspects, as does the suspicious death of another surly citizen. The learned Mara, the sole woman Brehon (or judge) in Ireland, is responsible for all crimes on the Burren as well as for deciding such delicate questions as inheritances and even, in certain circumstances, approval of a marriage proposal. Harrison depicts the intricacies of Irish law so clearly and marries them to her plot so adroitly that despite their unfamiliarity they are easily understood. Engaging characters from the honorable King Turlough Donn O'Brien to Mara's eager law students add to the pleasure. Mara's quest to solve the murders and “to restore peace to the people of the Burren” makes for compelling reading.