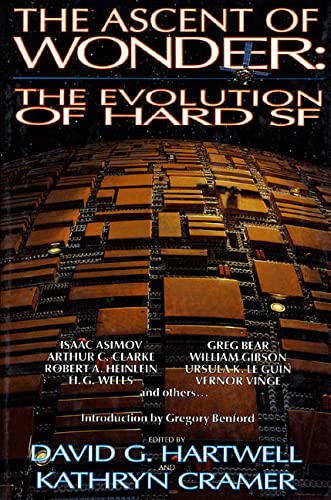 This massive tome contains some of the good, the bad and the ugly stories that have helped give ``hard'' science fiction its reputation as a refuge for writers more comfortable with a slide rule than with a pen. The collection starts off strongly enough, with Ursula K. Le Guin's ``Nine Lives,'' a lovely story about cloning, and it doesn't get into real trouble until it reaches Hal Clement's ``Proof,'' which is a textbook case of the maxim proposed by Gregory Benford in his introduction, that ``hard SF focuses on minimally characterized figures acting against a landscape of universal, scientific truths.'' The anthology then bounces through mostly lesser stories by luminaries of the field (Asimov, Heinlein, Clarke, Wolfe, Dick), several pieces by SF's pioneers (Kipling, Wells, Poe, Verne), and a small number of landmark works like William Gibson's ``Johnny Mnemonic'' (the story credited with starting the cyberpunk movement). Impressive tales by J. G. Ballard, John M. Ford, Bruce Sterling, Donald M. Kingsbury and Kate Wilhelm improve matters considerably, but then the anthology closes, inexplicably, with Verner Vinge's dated ``Bookworm, Run!'' Though the book's title claims that ``wonder'' is in ``the ascent'' in hard science fiction, there's little sense of forward motion--perhaps because of the odd, nonchronological arrangement of work. While hard-core hard-SF fans will no doubt find plenty to excite them here, most readers are in for the ascent of ennui. (June)
close
Details