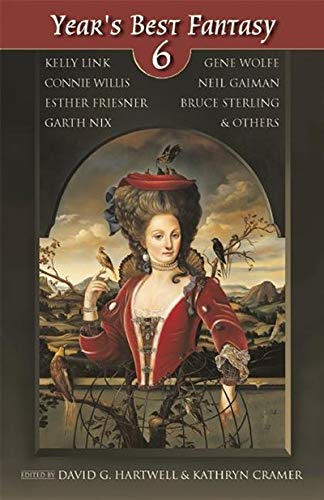 Hartwell and Cramer ( ) present 23 fantastic stories in this brilliant anthology, the first trade paperback installment of their popular Year's Best series. Most notable are Jonathon Sullivan's tear-jerking "Niels Bohr and the Sleeping Dane," which brings together physics and Kabbalistic magic during a daring escape from Nazi-occupied Denmark; Laird Barron's "The Imago Sequence," a heart-stopping tale of some deeply disturbing photographs and the people who will do anything to see them; Delia Sherman's "Walpurgis Afternoon," which brings glorious magic to a bland suburb; and Neil Gaiman's "Sunbird" with its R.A. Lafferty–flavored bittersweet hilarity. Stories from such renowned authors as Esther Friesner and Gene Wolfe are surprisingly outclassed by tales from relative newcomers Alaya Dawn Johnson and Anne Harris. With selections that aren't always technically perfect but pack a powerful emotional wallop, the editors easily meet their stated goal of offering not only a great read but also a broad and thorough overview of the current state of short fantasy fiction.