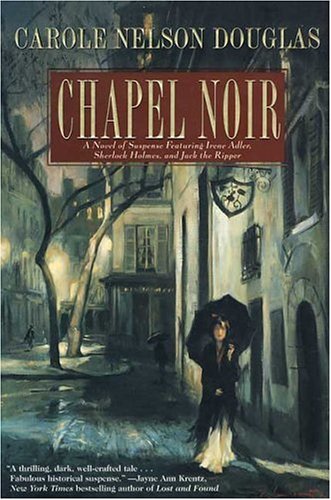 The prolific Douglas's fifth Irene Adler novel (after 1994's ) clocks in at nearly 500 pages, and by the end, some readers may feel as if they've climbed every one of them. An appendix with enough gall to put the hubris back in chutzpah includes a readers' group guide with suggested discussion topics ("If Nell is a 'Watsonette' and Irene Adler takes the leading Sherlockian role, how does this pairing illuminate the mores of the times?"), an interview with Douglas and a selected bibliography. This is remarkable for a book that hasn't an original idea in its head. Irene Adler, "the" woman of Conan Doyle's "A Scandal in Bohemia," as Douglas incessantly reminds us, is the only person to have outsmarted Sherlock Holmes, as Douglas even more incessantly reminds us. Irene lives with her husband (who's conveniently away) and her companion, Nell Huxleigh, who records her adventures and is the novel's most plausibly human character. Irene has had a varied and romantic life. She's been an opera singer and a part-time operative for the Pinkertons. In this capacity, her reputation "almost" rivals that of Sherlock Holmes, a thorn in her tiresome ego. Here the authorities ask her to investigate the murder of a pair of prostitutes in a Parisian brothel. The condition of the bodies leads her at once to conclude that Jack the Ripper has come to Paris. It's all very familiar, predictable and overwritten.