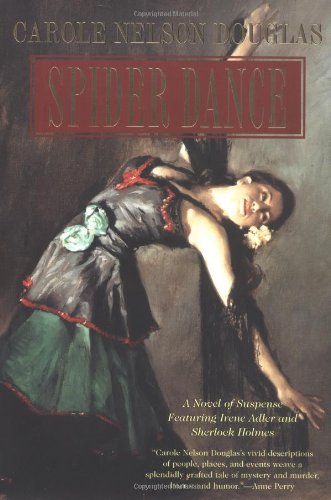 The game's afoot and dancing in Douglas's eighth historical thriller featuring the dynamic Irene Adler Norton, her able assistant Penelope "Nell" Huxleigh and that clever human bloodhound, Sherlock Holmes. At the end of their last adventure (2003's ), set in New York, Holmes suggested that "Mrs. Eliza Gilbert"—a name on a tombstone—may actually belong to Norton's mother. While an elderly cleric's brutal murder at William K. Vanderbilt's Fifth Avenue mansion occupies Holmes, Norton discovers that Gilbert is Lola Montez, the fabled "Spanish dancer" whose ill-fated romance with King Ludwig of Bavaria made her fodder for the gossip columns in the pre–Civil War era. When the two investigations intersect, Norton and Holmes find they must cooperate with each other. Emotion as well as logic figures in solving the dual mysteries of the cleric's murder and Norton's birth. Witty, fast-paced and meticulously researched, this sepia-tinted Victorian confection also reflects a contemporary sensibility as it ponders religious fanaticism and the challenges of a female celebrity living by her own rules. If indeed this is the last of the series, as the author has indicated, it closes on a definite high note.