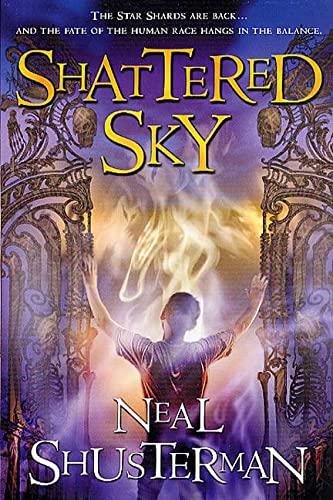 The third and final book in Shusterman's Star Shards Chronicles (; ) is not for the squeamish, as it mixes plenty of blood and gore with big philosophical questions. The earlier novels followed the six superhuman "Star Shards"—Dillon, Winston, Michael, Deanna, Tory and Lourdes—into rocky adulthood, and saw the deaths of Deanna, Michael and Tory, even as Dillon, the most powerful of them, became a legendary villain for collapsing the Hoover Dam. Though believed dead in the disaster, Winston, Lourdes and Dillon still live. Dillon is held prisoner in a secret military installation where the government hopes to exploit his power to resurrect the dead. He escapes with the help of Elon Tessic, the brilliant Israeli engineer who designed his prison, and is reunited with Winston, who's been searching for him and Lourdes, driven by a strange dream that portends disaster. The Shards' old enemy, soul-eating alien Okoya, warns them of the arrival of three Vectors, beings of his own race who've come to Earth after being driven out of their own space by a mysterious virus. Now Lourdes is cooperating with the aliens and Dillon and his remaining companions must somehow recover and reunite the rest of the missing Shards if they have any hope of saving Earth. Though things come together a bit too easily in the end, strong themes of morality, vengeance and the emotional cost of great power should intrigue thoughtful readers, whether or not they've read the previous volumes.