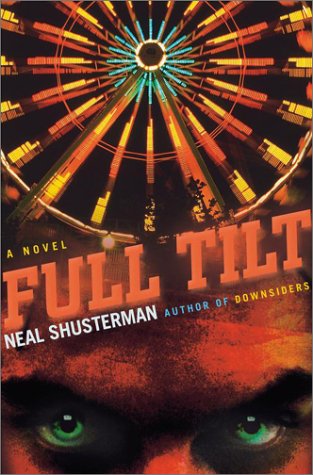 In a book that moves like one of the roller coasters it describes, a teenage boy must face a series of tests that represent his deepest fears in order to save his brother. Narrator Blake, a thoughtful 16-year-old student about to leave home for an early college career, follows his daredevil brother, Quinn, into a haunted amusement park. Once inside, he learns the park's sinister secret: he must finish seven rides by sunrise, or become trapped in the park forever. Ultimately, Blake is forced to confront the memory of a horrible bus accident from his early childhood, and the resulting fears and regrets that have stayed with him. Blake and Quinn are skillfully cast opposites: the former an orderly-minded, intellectual student who avoids risk, the latter an earring-studded adrenaline junkie who would rather flirt with death than be bored. Amusement parks, where chaos and order work hand in hand, make an ideal setting for coming-of-age stories (Ray Bradbury's , to which this book bears more than slight resemblance, being the best example). Despite the escalating surrealism of the rides, Shusterman keeps the narrative in Blake's matter-of-fact voice, making the tale oddly believable. But in the colorful blur of the park's tests and challenges, there is little time for deep character development, and Blake and Quinn evolve little beyond caricature. Ages 10-up.