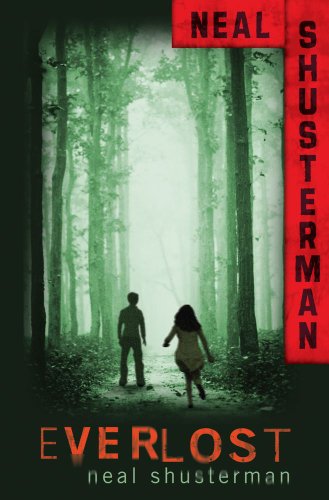 Shusterman's ( ) enigmatic novel imagines a purgatory where only children go, with its own vocabulary and body of literature plus a monster named the McGill. After a car accident, teens Allie and Nick awaken 272 days later in Everlost. "It took nine months to get you born, so doesn't it figure it would take nine months to get you dead?" says the boy who discovers them, a nameless, lonely child they call Lief (an "Afterlight" who is 100 years old). In Everlost only the young exist, because adults "never get lost on the way to the light." The World Trade Center is there, too, home to Mary Hightower, a 15-year-old shaman of sorts and author of countless books (e.g., ). Shusterman uses excerpts from Mary's books (with an increasing sense of menace) to segue from one chapter to the next. Allie's flight from Mary's kingdom of "perfect routines," and her attempt to rescue Nick and Lief from a six-year-old spectral gangster lead her into a conflict with the monstrous McGill (with "sharp, three-fingered talons for hands,... its mismatched eyes wandered of its own accord"). Along the way, Allie learns the art of "skinjacking" (inhabiting the living), and Nick discovers a thing or two about the mechanics of Everlost, much to Mary's dismay. Shusterman's landscapes seem both familiar and ghostly, just the right mix for this fascinating limbo land that readers can only hope will provide the setting for more books to come. Ages 12-up.