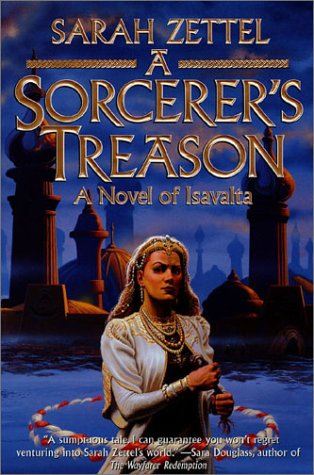 A SORCERER'S TREASON: A Novel of Isavalta

Alternating between her lighthouse-keeper heroine's native Wisconsin and the magic-ridden world of Isavalta, SF author Zettel's () first fantasy novel, despite a plodding plot, should please readers eager to leave this dull world of ours behind. In the year 1899, during a gale on Lake Superior, Bridget Lederle rescues a lone sailor, Valin Kalami, who proves to be a visitor from an ethereal realm called Isavalta, the home of Bridget's birth-father, who impregnated her mother during a brief stay on Earth. Her Isavaltan blood explains Bridget's sporadic ability to see both the past and future. Kalami persuades Bridget to travel to his dazzling world, where he is Lord Sorcerer to the Dowager Empress, Medeoan Edemskoidoch Nacheradavosh (a name typical of the book's tongue-twisting nomenclature derived from Russian and various Asian languages), who refuses to hand over rule of her kingdom to her mysteriously ailing son, the Emperor Mikkel, and his new bride, Empress Ananda. Intrigues abound, magic lies hidden within threads, a fox becomes a powerful "Vixen" and the dowager keeps a caged phoenix capable of engulfing the world in flames. Since the old woman simply won't relinquish power, Bridget must fight both her and her traitorous sorcerer. Villains may menacingly twist figurative moustaches, but none seriously threatens the courageous heroine's virtue. This sweet-tempered melodrama will appeal mainly to younger female fantasy fans, who will be sure to welcome the forthcoming sequel.